Even if you don’t consider yourself an avid do-it-yourselfer, having some basic tools available can be an important safeguard against plumbing disasters. This list includes the bare essential plumbing tools that will keep you from having to reach for the phone every time a plumbing issue arises. In some cases these tools will save you the inconvenience of calling a plumber to deal with a clogged toilet, while one of these tools could potentially save you thousands of dollars in the event of a serious leak.

There are few sensations quite as disheartening as flushing your toilet, only to watch the water level rise and rise. In those brief moments you’ll probably find yourself frozen in place, mentally willing the fetid water to stop short of the edge of the toilet. In those blessed occasions that the water level stops rising and then slowly drains back to a less heart-racing level, you may try flushing the toilet again, hoping that the blockage manages to clear itself. However, oftentimes the only solution will be to call upon the services of a plunger – relying on its ability to create hydraulic pressure and suction to clear clogs.

Despite seeming like a simple tool – the reality is that plungers are one of the least well understood and most often misused plumbing tools. First, it is important to realize that there are two types of plungers: cup plungers and flange plungers. Cup plungers, sometimes called sink or tub plungers, resemble an oversized suction cup on the end of a stick, and are not intended for use on toilets. If they are your only option they may work – but if you’re assembling a basic plumbing toolkit you should invest in a flange plunger for toilet disasters. Flange plungers include a long handle and a roughly spherical head which creates a much better seal against the bottom of your toilet bowl. 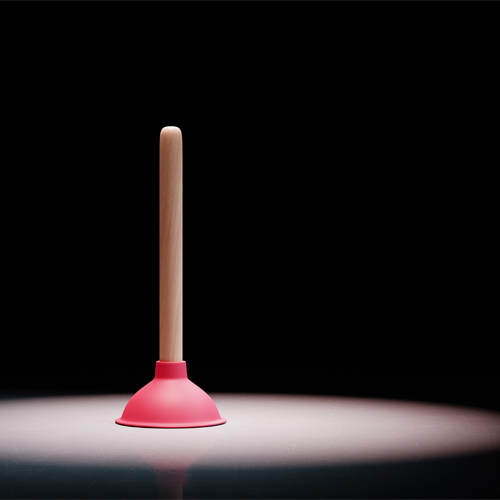 When you are using a plunger, be sure to put the plunger in at an angle, allowing the rubber ball to fill with water. Water is effectively incompressible and thus offers much greater clog-clearing abilities than air. This also means that if the water level of your toilet bowl is too low, you may need to add water to the bowl before using the plunger. If someone has already tried to break up a clog with a chemical drain cleaner like Drano then be aware that by using a plunger you run the risk of splashing yourself with caustic chemicals. In this case you may need to contact a professional and explain the situation. Always try to clear clogs with a plunger before resorting to dangerous chemicals.

When it comes to clearing clogs in sinks and tubs nothing beats a hand auger. Sometimes called drain snakes, these tools include a spool of flexible metal wire which is forced into the drain, either pushing the clog out of the way, or extracting the clog when the snake is removed. One thing to keep in mind is that just like plungers there are augers specifically designed for toilets. Toilet augers have a curved rubber or silicone head which allows the metal snake portion to reach beyond the bend at the bottom of your toilet without damaging the porcelain. 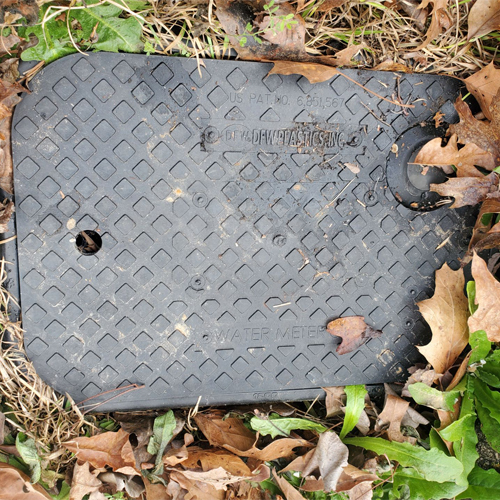 A water shut off curb key is a tool that you hope you’ll never have to use, but you’ll be incredibly glad to have if you ever need it. Essentially, this tool is just a forked metal rod with a handle, and will allow you to turn off the water to your house. This will come in handy if you ever experience a leak which you can’t shut off from inside your home – say if you accidentally break off a valve fitting or if a pipe bursts. Being able to quickly shut off the flow could make the difference between wet floors and thousands of dollars of water damage remediation. Now, you should know that just having this tool won’t be enough in the event of a plumbing emergency. You’ll also need to know where your water shut-off valve is located and make sure that it is kept accessible.

After you pick up a water shut off curb key, be sure to locate your home’s water shut off valve. Usually this can be found inside of a plastic or concrete box set into the ground near the street which provides access to your house.

A particularly handy tool to have around the house is an adjustable wrench. These wrenches, sometimes called monkey wrenches, allow you to loosen or tighten hex nuts of a wide range of sizes. The great thing about an adjustable wrench is that one tool can take the place of an entire set of open-ended wrenches. There is a caveat here – adjustable wrenches are known for damaging hex nuts due to their imprecise fit. If you find yourself using this wrench frequently it might be a good idea to buy a set of open-ended wrenches which match the size nuts you’re working with. 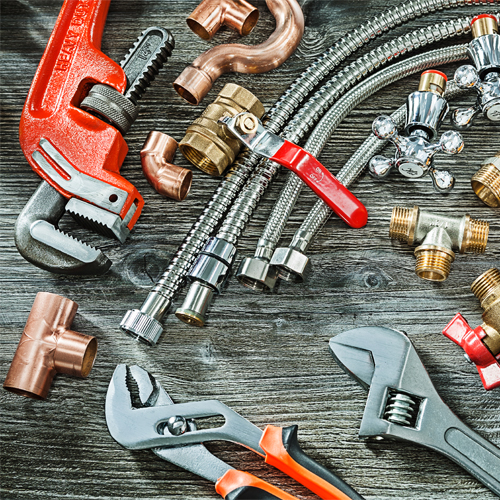 Another type of wrench which is good to have on hand is a pipe wrench. Unlike adjustable wrenches which are designed to tighten hex-nuts, pipe wrenches (as their name suggests) are designed to turn round pipes. They are able to do this by having hardened steel teeth bite into the soft copper pipe. This allows the wrench to firmly grip cylindrical surfaces. This type of wrench will cause surface damage and so should not be used on surfaces with decorative finishes or where the damage may distract from the aesthetic.
One wrench which fits into the “nice to have” category, but isn’t exactly essential is a basin wrench. These peculiar looking wrenches are a useful tool which help you install or remove sink faucets. They are designed to help overcome the limited space and awkward angles involved in holding faucet hardware in place.

Channel-type pliers, or tongue and groove pliers as they’re less frequently known by, are a fantastic tool for any homeowner to keep in their toolbox. Channel-type pliers are often called Channellocks, after the brand which makes many different sizes and styles of these pliers. The jaws of these pliers are able to open wide enough to accommodate plumbing fittings, as well as being able to grasp small objects, making them extremely versatile. Pliers and wrenches often are called on to serve the same purposes – but the two tools have different modes of operation and thus different benefits. Pliers must be held shut while in use, while wrenches only need to be adjusted prior to use. Sometimes it may be advantageous to have the additional leverage allowed by the continuous squeeze being applied to pliers – like in the case of a damage nut. In other cases, like working in narrow spaces underneath a kitchen sink, the fixed head size of a wrench may be more practical. If you can only pick one, arguably channel-type pliers are more practical than an adjustable wrench, however a typical home improvement plumbing project will often require two wrenches or pliers to fully tighten a fitting. Having both channel-type pliers and an adjustable wrench is the ideal solution. One thing to be aware of: PVC plastic pipes are more fragile than metal pipes and you should generally avoid using wrenches and pliers on them. Plastic fittings generally should only be hand tightened.

Slip-joint pliers are basically smaller, less-complicated versions of channel-type pliers. These typically have two settings, allowing the jaws to be adjusted from narrow to wide. Generally at the wider setting these pliers will be able to grasp smaller plumbing fittings. What these pliers lack in adjustability they make up in portability. Small and lightweight compared to their bulkier channel-type peers, slip-joint pliers are able to be used in tight spaces and are great for manipulating small fasteners. 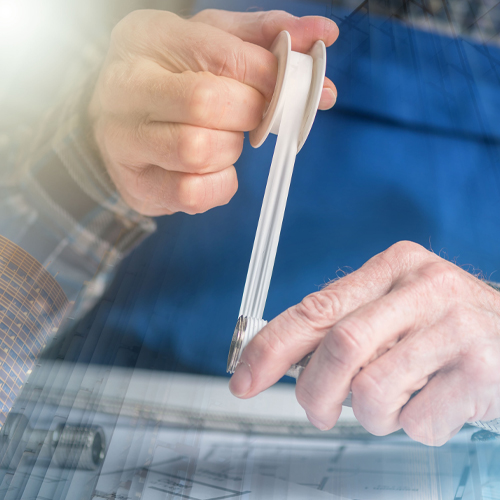 Despite its name Teflon tape is generally not made by DuPont but is made from the non-stick chemical you’re probably familiar with from kitchen pans. This tape, also referred to as plumber’s tape or thread seal tape, is made from PTFE (polytetrafluoroethylene), a chemically inert, hydrophobic polymer with an incredibly low coefficient of friction. Plumber’s tape, when properly applied to pipe threads, allows a secure, leak-free connection. In addition to helping prevent leaks, teflon tape also helps ensure that pipe connections won’t seize up, ensuring an easier removal in the future. If you’ve got a leaky showerhead connection, a quick DIY fix you can try is to remove the head, clean the threads of any old teflon tape, apply fresh tape, and reinstall. In many cases this is all it takes to fix this sort of bothersome leak.

If you buy a garbage disposal it will almost certainly come with an allen wrench. This wrench is not to help you install the disposal, but is actually a tool for fixing jams! If your garbage disposal doesn’t spin when you flip the switch there’s a good chance that something has gotten lodged in the unit causing it to seize. No need to despair, however, simply turn off the garbage disposal and use the included wrench to manually spin the disposal back and forth until the jam has been released. There will be a hole at the bottom of the unit where you can stick the wrench – but be sure to consult your unit’s user manual if you aren’t sure what you’re supposed to be spinning! Most disposals have a reset button similar to a circuit breaker, and depending on how long you tried to run the unit while it was stuck this may need to be pressed before the unit will work again. If your home or apartment came with a garbage disposal but no wrench, try to see if a ¼” allen wrench fits. It is a good idea to store this allen wrench under your sink so it’s easy to find when you need it. You can use rubber bands or zip ties to secure the wrench to your sink’s discharge pipe, keeping it above the clutter of miscellaneous cleaning products.

These eight tools will take care of the most common plumbing jobs you’ll encounter, from clogged toilets to burst pipes. For more serious plumbing repairs you’ll want to contact a reputable plumber. If you’ve got recurring clogs or slowly draining sinks that you can’t fix, your plumbing system may need a professional drain cleaning. Kay Plumbing offers this service to residential customers across the South Carolina Midlands. Contact us today and get your plumbing problems fixed right!

Schedule Appointment
Call Us: 803-445-3707
← Save Water Using these Water Conservation Tips and Tricks Winter Plumbing Tips: How to Avoid Plumbing Issues During the Winter →